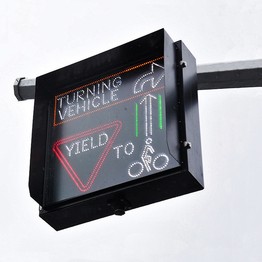 Citizens across the world are beginning to turn to bicycles and even their own feet in a bid to cut down on pollution and save money on their commute.  But with this increase in different types of traffic comes previously unrealized safety hazards, leaving many city planners and technology companies to try to come up with solutions in the form of new and improved traffic signals.

Portland, Oregon is one city that has been at the forefront of making their city more bike-friendly.  One effort has found little blue lights which tell bicycles whether or not their presence has activated a sensor-based green traffic signal.  Another sign (see right, image courtesy of Jonathan Maus/BikePortland) only comes on when a bike is on a bike lane and approaching the intersection.  If such a situation presents itself, drivers are required to look behind them and only turn right once the bicyclist has safely cleared the gap.

But it isn’t just America that has looked to make improvements to safety.  Mexico now has a traffic signal featuring a countdown timer and a pedestrian whose limbs move faster and faster as the clock ticks down toward zero.  And Groningen, in the Netherlands, has traffic signals that only pertain to bikes, letting cyclists cross in any direction while motor vehicles are forced to wait.